Is the Droid Love Affair Over? Absolutely not, but…

I love my Droid. Simple as that. But a serious flaw has revealed itself that has the potential for catastrophic consequences for my new little buddy. It’s a problem so obvious that at first I couldn’t believe it and hoped it just went away – but it is a critical problem that could cripple the Droid, and therefore needs to be addressed. 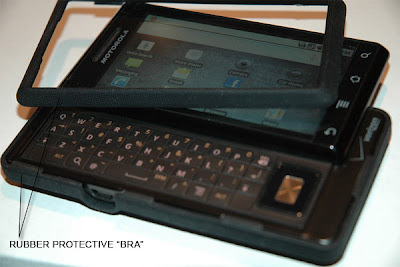 First, let me say that I have never owned an iPhone, Blackberry, or any other Smart Phone – ever. I have been a loyal Motorola phone user for years (my phone previous to the Droid was a Razor) and I WANT the Droid to be successful for so many reasons. 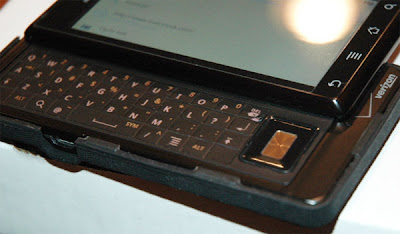 So, when I was at the Verizon store when they opened yesterday (the first day of availability of the Droid), I got my Droid, all the accessories, and a big smile on my face. Of course I got the car charger, the car mount (for GPS mode), and the Verizon-recommended rubber protective “Bra” – this latter accessory consisting of two-piece rubber that attaches to the top and bottom of the Droid. And it is this “protective” accessory that has the potential for catastrophic interaction with the phone. The problem is that is seems the “face” of the keys on the keyboard are glued on to the keys – no big deal, except when you slide the keyboard open and the rubber bra catches on the keys – in my case the edge of the DEL key caught and started to peel up. At first I didn’t realize why the slide was “sticking” but then quickly determined that if I opened the keyboard all the way up, it would rip the face of the DEL key right off. CRAP! 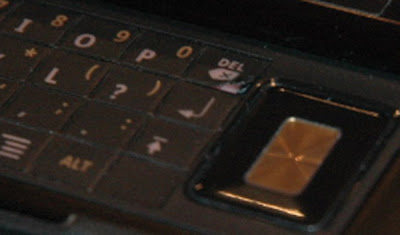 If you look closely at the picture above, you can see the corner of the DEL key pulled up. For now, I have used my fingernail to push it back down and I removed the top piece of the rubber protective “bra” and everything is working fine. But I can no longer use the top piece because it will rip the key face right off. I’ll be visiting the Verizon store tomorrow to seek a remedy, but in the mean time, I would caution everyone not to use the rubber bra thingee on top.

Has this experience soured my excitement for the Droid? Hell no. I told you, I love the little guy. I struggled with even raising this issue, but it was clear to me that this is a problem that will continue, and maybe the next guy who writes about it will use this flaw to slam an otherwise fantastic device. For me, I’m sticking with the Droid… quirks, flaws, and all -- but my Droid will go topless without the rubber bra.

[UPDATE: It runs out that the BRA has a small tab on three of its four sides. It must be installed so that no tab is on the bottom side where the keyboard slides open. Regrettably, neither Motorola or Verizon provide any instructions in this matter.]
Posted by Unknown at 7:38 PM

Just letting you know that you're not the only one.

Never used an iPhone? Ignorance is bliss. Whatever you do, don't use an iPhone. You will find out what you are missing. Let's start with no little pieces of plastic glued on to the device. A well designed case (1 1/2 years before the DROID). Motorola is yesterday's phone.

@GaryToews I guess it doesn't count that I do own a Mac Air, 3 iTouches, and more iPods than I can count... For me, there was no compelling reason to leave my Razor, but, as a software developer, I continue to be very interested in Android... and the Droid still has the best implementation.

You have the cover on backwards. If you spin the cover around you'll see that the other side doesn't come close to the keys. The way you had it was also covering the speaker hole. That should clear up your issue.

@pat Actually, half correct. The bottom can only go on one way (and it does not block the speaker. However, on closer examination, the top piece does have a small tab that interferes with the keyboard (right around the DEL key), which is not an issue if you flip it around. Thanks for pointing this out.

I came to say what Pat said, but he beat me to it.

I haven't really started using the built-in keyboard yet, preferring the on-screen one. I'll have to give the built-in one a try for a week or so to see if I can get used to it.

I got a Droid myself. I love it. Didn't bother with the rubber bra, but was considering it. Good to know about the tab...

Ditto what Pat said...if the "virtual" keyboard had a D-Pad, I'd probably never open it. Other than that, the integration of Google has been awesome for me. Don't like Google, won't like Droid. What happens when the iPhone battery conks out? Just curious.

100,000 apps on iPhone and only 10,000 on Android - darn, I really wanted to download all 4000 alarm clocks on iPhone. Let's face it, there are only so many apps a person needs or wants. If you "browsed" every app for 15 seconds, it would take you over 17 days non-stop to look at them all. Woopie!! I'm not an iPhone hater, I was waiting on the Pre from Verizon when the Droid came along. I can describe it in two words or nine words - LOVE IT!! or DOES EVERYTHING I NEED IT TO DO AND MORE!!!

Never was a bra fan anyway!!!

Can't agree with you about the rubber protector. I have mine on (same one) and it doesn't even come close to the keyboard. Are you sure you "snapped" all the tabs in place? I've looked at mine straight on with a flashlight with a magnifying glass (you had me very concerned) and I've got total clearance above the keyboard.

Now if you want to talk about issues, let's talk about no hands free blue tooth dialing.. There's one we can chew on.

90,000 of those iPhone apps are from Dijit or Brighthouse. They are total spam. I get the point about app selection, but let's quit tossing around 100,000 when we know most of them are just filler from a few spamming developers.

I am not the most tech savy person and have had my Droid a bout a month and LOVE IT! Looked at many phones and tried a few before I gave the Droid a shot. I haven't looked back. One of the pluses is physical keyboard in addition to virtual.