Here's to those mean and despised open source nut-case curmudgeons!

Open Software advocate Chris Messina pondered the other day if he was getting too harsh in his old age (yeah right!) in a post entitled “When all I seem to do is bitch, bitch, bitch”
He was caught up in an interesting debate regarding, what else, open source, and said:

"It would seem as though I’ve become one of those mean and despised open source nut-case curmudgeons with nothing nice to say. How soon we forget the lessons our mothers taught us."

The post is awesome, heartfelt, and insightful; and the comments themselves are quite revealing. Here was my response:

"Bitch, bitch, bitchin is our God-given right! But it doesn’t always get us the results we intended. Sure, we may feel better about it at the moment, but all too often it invokes regret and two aspirin in the morning.

"Yet sometimes that is exactly what the world needs — smack-down, called to the mat, black ‘n blue upside the face, called-me-out-cause-I-deserve-it bitchin’!!!!
Still, that crazy balance of life often let’s us accomplish even more with tact and being polite; or better yet: tactful politeness.

"Balance. I suspect as time goes on that you, Chris, will increasingly weild that balance like a sword — to all of our benefit!!!! Bitchin’ included!

Bottom line: don’t stop what your doing just because you stir up the muck. All too often it needs to be stirred, and we always need people willing to step knee deep in the mire for the benefit of the masses!
Posted by Unknown at 10:10 PM 1 comment:

Yesterday, social aggregator POWER.COM filed a countersuit against Facebook that raises some thorny issues for Facebook and adds some interesting defenses for the case of data portability and personal data ownership. It is not yet clear from reading the pleadings whether either party will win in this escalating case (there are some key issues and concepts on both sides that a Court will have to wade through), but it is clear the issue of Data Portability comes center stage.

Jason Kincaid over at TechCrunch released an interesting article on the subject, “Power.com Countersues Facebook over Data Portability,” along with a copy of the counter-suite.

In their opening salvo, Power steps up to the soap box and discusses “a borderless Internet where users have the right to own and control their own data” and goes on to present their recently adopted “Internet User Bill of Rights:”

This is great stuff for users and data portability, and in many ways mirrors much of our work over at the Data Portability Project (http://www.dataportability.org), however it has little to do with what Facebook is doing in the context of their site or their lawsuit. It does, however, place Facebook in a position of having to answer why it does not agree with these principals.

Thus far, Facebook has tread cautiously as it relates to user data and rights therein. They do not wish to give away the store or proprietary and competitive advantage, nor do they wish to (further) incur the wrath of its users by inflicting too many restrictions. Many of us hoped that a number of Facebook’s recent initiatives signaled their willingness to explore a leadership role in this highly important area. Unfortunately, the pleadings conflict with this hoped for direction.

From Facebook’s perspective, Power.com violated Facebook’s stated terms and conditions; the contract that establishes the relationship between the parties for the use of the site. Every Facebook user has agreed to this (or they wouldn’t be using the site), but, like virtually every other “terms and conditions” document, it is overly broad, highly protective, filled with legalese, and generally ignored by most actual users. It is merely the lack of enforcement by the provider (in this case Facebook) that keeps these things out of court more often. (The standardization and simplification of this topic is also the subject of much work over at Data Portability and other advocacy organizations).

Power.com counters by saying they are doing nothing that Facebook isn’t already doing themselves, and, besides, theirs (they believe) is the right way anyway. It is clear that Facebook does not agree with this position but now is in the difficult position of explaining why many of the good points that Power.com raises are not valid within Facebook.

Still, Facebook is a privately held company and they get to decide what is allowed or not. No court, other than the one of public opinion, can force them to do what they do not want to do – unless the legal line is crossed.

And while I do not believe that Power.com has a leg to stand on when trying to win based on how much “screen scraping” of data is allowed (Facebook’s terms and conditions say none), they have raised some interesting issues that could inspire both the court of opinion and the hollowed halls of justice.

At the very least, Facebook is highly conflicted. It does not own the copyrights associated with all of the information available on its site; it does use some of the very techniques with 3rd-party sites that it accuses Power.com of using against Facebook; it has moved in the direction of providing greater access to its data; and it is party to litigation that potentially represents a PR quagmire.

More significantly for Facebook, Power.com raises the issues of “Restraint of Trade” and “Restraint on Competition” regarding data portability which both lead to the dreaded “M” word: MONOPOLY. Specifically:

“Facebook’s conduct restricting users’ ability to access their own data constitutes an unlawful restraint of trade under Section I of the Sherman Act.”

“Facebook’s conduct constitutes monopolization (or attempted monopolization, ed.) of the market for social networking website services in violation of Section 2 of the Sherman Act.”

With all of the issues at hand, I predict that there will be chest banging and posturing by both sides, some “interesting” press conferences, followed by a negotiated settlement that washes the issue aside and lets both parties (partially) save face. Regardless, Facebook will likely take a PR “black eye” over this.

But I submit there is another, better, solution: Facebook should not only continue its current efforts of data portability and accessibility, but become the leading player on how to do it right! Users would benefit, Facebook would be crowned a friend to all proponents of Data Portability, and the lawyers would find something else to do! In absence of such, Facebook risks becoming the view in the rear view mirror for the company that actually does get it right.

IMHO.
Posted by Unknown at 8:59 AM No comments:

The Google OS: “For Developers, the Web is the Platform” (Yeah Baby!)

Last night Google announced what many have been suspecting for some time, the creation of a Google Operating System (OS) based on (what else?) the Google Chrome Browser! This is not something that (initially) directly competes with Windows, however the Google OS could easily take a lead position in the NetBooks category, an area defined by simplicity and specificity of task. More so, this “OS” has the chance to provide the single most requested feature sought in an operating: instant on! 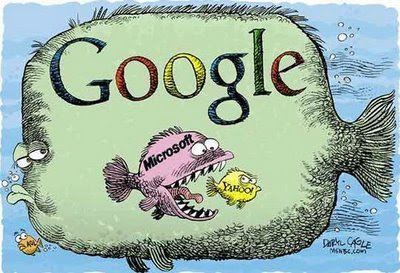 The title quote to this post, most recently by Mike Arrington over at TechCrunch, reinforces what we’ve been saying for some time: “the browser is the delivery platform for modern application; it is OS agnostic, ever present, and increasingly robust.”

The problem, of course, is that browsers are not necessarily compatible with one-another, even from one version to the next. What’s needed is a browser-based abstraction layer that “normalizes” this exciting platform and allows web apps and web sites to act, interact, and display the same across all of the browsers. Our solution to this is called xWinLib; a JavaScript library (with server-side interaction via Ajax, OpenAjax, and other web services) that provides a powerful platform for the creation, delivery, and operation of complex web applications. From the xWinLib site:

It will be interesting to see how all of this shakes out. Google will innovate their way into new spaces and force Microsoft to compete, evolve, or give way. Along the way, the web as a platform will be good for all! What a great time to be a web developer!
Posted by Unknown at 9:24 AM No comments: